Back on February 27 2014 I had a encounter in which a creature we named Goliath which was standing 30 to 50 feet in front of me while I was casting prints. you can find the story here at https://bigfootlore.blogspot.com/2014/02/tom-comes-face-to-face-with-male.html. Mr. Bo Bruns owner of Unit 70 Studios. Mr. Bruns was interested in building Goliath working with only a sketch and detail information That I provided. He indeed created a exact life size model of the creature I witness. When I saw the finished product it brought back memories of that day and my heart raced from the anxiety. I never thought I would ever see that face again now, I'm sharing the photos of the Kentucky Bigfoot that walked up on me in the woods of Trimble county KY 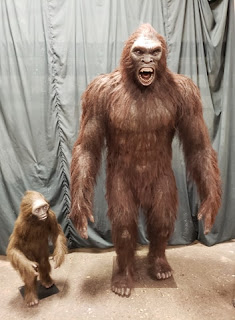 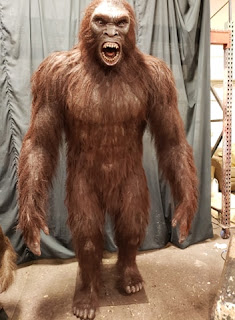 Some strange incidents have been occurring on a farm in Carroll County Kentucky form 2005 to 2020. There have been several people talk about seeing something in this general area. Yesterday I went to the area and was able to talk with one of the individuals and get some what of a look at the area before being called away.
The individual describing what happing in there own words.

We have a farm in Carroll County and have lived there since December 2005. The first winter we had some "happenings" but none were substantiated. I wrote to T.Shay and be posted the story. I found  what appeared to be a questionable track in the Spring of 2006. Other than that, there has been no real activity until recently.
A few weeks ago, we began to notice increased coyote activity, howls and yips mostly. We went to Glauber's to get some traps. One of the ladies there told us that they had sold well over 100 traps in just a few weeks.  She said this was a record for them.

When we first moved, we would sometimes get the feeling we were being watched. That went away when the odd activity stopped. In the past couple weeks, we have noticed several times that the farm had a certain "feel" to it. Things would be quiet and we would feel like we were being watched. We began to notice little things. I heard what sounded like a tapping on a window one night.  Later I heard what sound like a larger animal moving around. In the morning our miniature horse was in front of the house so I assumed it was him. I blew off the tapping as a bird or cat... something along those lines.

We have also been having the feeling that someone was up by the house when we weren't around. Our house is difficult to get to and secluded. There's no reason anyone would be up there.  Because of this, we began to check tracks on our driveway and other paths people would use to get to our house.  This past weekend (2/29-3/1) I noticed what appeared to be a barefoot track about the size of my foot. I wear a 9. I looked at it closely. It appeared slightly deeper than my tracks were. I weigh 130-135. I looked around and saw another track, appeared to be another left foot. This one had the impression of 5 toes, the first only seemed to have 4 with a hint of the 5th. They stride length was close to mine when I am walking. I am 5'6".  I marked the tracks as I had other things I had to do with the intention of coming back to take pictures, measure and take a good long look to see if it was possibly just an overlap of boot prints with my dog's. It rained a short while later and the tracks were washed out.
Monday, 3/2, a friend of ours needed me to bring something down the hill to our "parking lot." I was walking, the driveway is about 1/2 mile long with trees on both sides. If you are headed down the hill, there is a valley to the right and the hill goes up towards the house to the left. I had my 22 rifle due to the coyotes. I began to hear a "squeaking" sound to my right. Sounded about halfway down the valley. It almost sounded like a mouse squeak but coming from a larger animal. I had never heard it before.  I admit that I was a little frightened. I called out something like, " stay away, I'll shoot ya." Right after I said that, a large limb came from somewhere and hit some downed trees and branches. It hit with force. It was windy that night. So that could have been it. But something has bothered me about that and as I was typing it hit me what it was. I don't think the way the limb fell and the direction of the wind matched. I hesitate to say for sure since I am fully aware my mind could be playing tricks, but it seems to me that is what has bothered me about the limb. The squeaking never stopped except for a second maybe after the limb hit the deadfall.  I decided that my 22 wasn't gonna be much help so I rushed on down the hill.
Late Tuesday night, early Wednesday morning, some friends were coming up the hill in their truck. The truck wouldn't go into 4x4 so they stopped to see if they could fix it. She was holding the light so he could see. She heard something fairly large that appeared to be coming toward them. It stopped several yards away. She kept looking back and saw yellow eye shine a couple times. I asked her how high off the ground and she indicated between 3-4 feet. I asked her how far apart and she indicated 6-8 inches. I didn't get any more details. I will update if I get more. They got their truck fixed and came on up. I had not told them about any of the other stuff that had happened until she told me about this.
Last night was Thursday 3/5. Nothing much happened. I thought I heard a couple low growls and we did feel like something was watching us. The growls were on the edge of my hearing though and most likely are something else. But there was a scratch on the same window that I had heard the tapping. There were a couple odd sounds outside like something walking into stuff. But nothing more definitive and admittedly,  I was a little jumpy. This time I decided to go ahead and get this info to T.Shay.
I don't pretend that any of this is proof. And I have little but my word to speak as "evidence." I make no claims as to what this could be and I readily admit there are rational explanations for all of it. On the other hand some of the things that have happened are similar to reports of suspected activity. Thanks.
Posted by thomas shay at 7:09 AM No comments: Links to this post


Trimble County Kentucky episode
Posted by thomas shay at 5:46 AM No comments: Links to this post

Wolves are in Kentucky

http://www.timberwolfinformation.org/ky-officials-confirm-that-animal-killed-by-ky-hunter-in-march-was-endangered-gray-wolf
Posted by thomas shay at 10:30 AM No comments: Links to this post 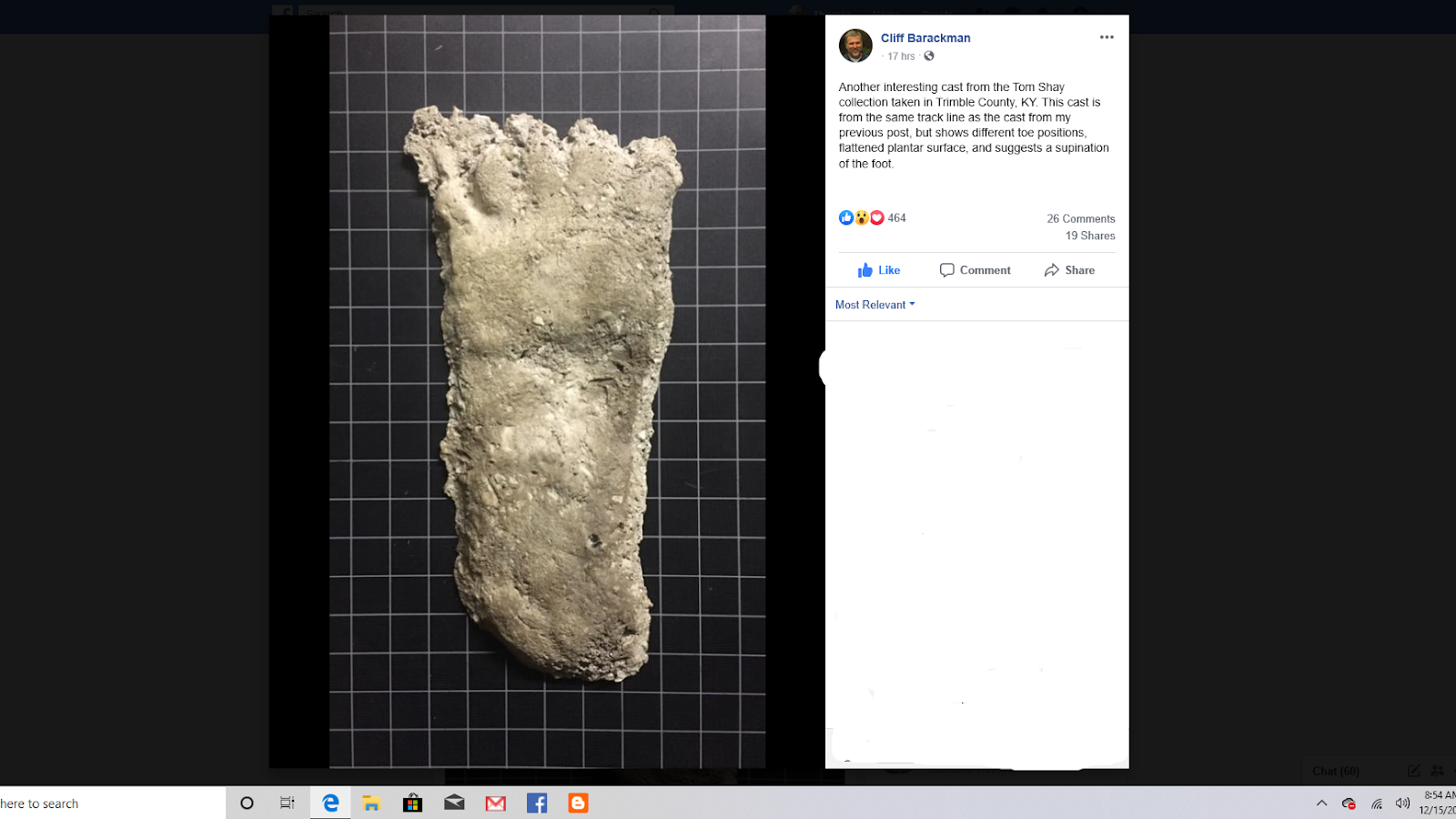 Posted by thomas shay at 9:00 AM No comments: Links to this post 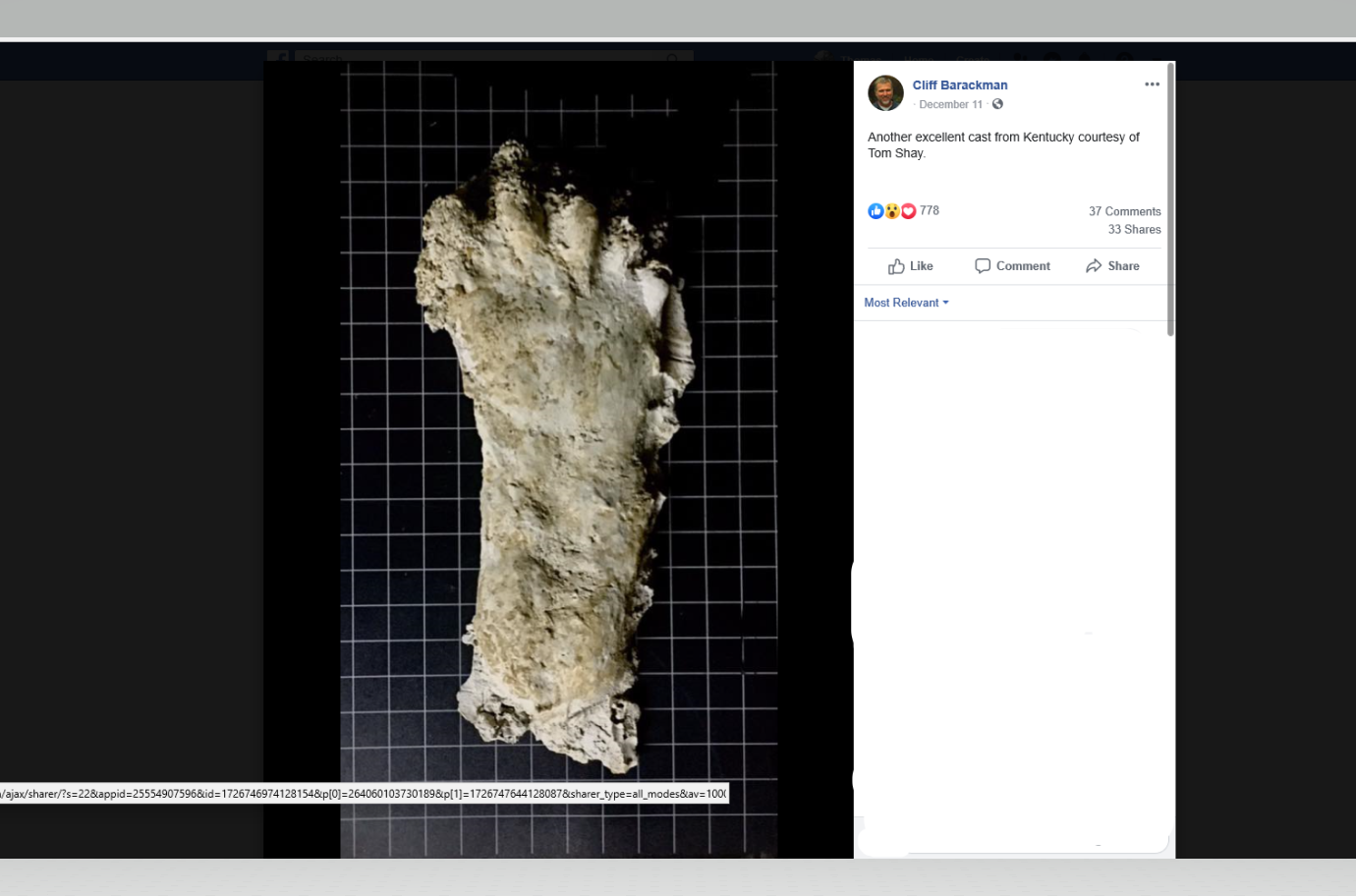 Posted by thomas shay at 7:43 AM No comments: Links to this post

Wow! Our December expedition of December 6th ,7th and 8th yielded some interesting results.
O n the first night, after placing our four cameras and DVR system, We captured some interesting footage which will be shown after I completely review all the video recordings. Around 6:30 pm on Friday night, Shelia placed her audio recorder, around 100 feet behind base camp, where she heard a loud clap. Later after she reviewed the audio recording you can hear the loud clap also a few whoops,  distant howls and knocks. We were able to capture these on other audio devices Friday night into the early hours of Saturday morning.
At around 8:30 am Saturday morning, the landowner walked back to our basecamp at which time he informed us that back on the trail he found what appeared to be a footprint crossing the trail.
We immediately investigated the print, the print was 12 inches in length with some toe detail upon further investigation we found several other prints moving into the woods by the same individual.
Jan Ehl documented said print with photos and then casted said print.
Saturday night not much happen a few knocks and a distant vocal. Things didn't get exciting until around 2:30 am, Sunday morning at which time most of us was half asleep and wrapped up snug keeping warm close to the fire, We heard something large circling basecamp and suddenly something huge, moved down the hill, stomped thru the leaves, and broke large limbs laying on the ground as it stomped off. This was at least 10 to 15 feet behind myself and Keith Loftin. It kept itself just outside the light of the fire. By this time everyone in basecamp heard it and was scrambling for there thermals and nigh vison cameras by this time it had moved off quickly into the night. We thermed the area to no avail but Ben Taylor did use his thermal on the ground where we observed the heat signature of its foot falls which appeared bipedal. Rest of the morning was uneventful after that. Myself and Keith Loftin will continue to review rest of the audio and video. Note we did capture something close to the audio equipment you can clearly hear something exhale next to the parabolic dish which was 100 feet out side basecamp. and a loud growl and grunt.
We are planning another expedition soon ,we will try and get the evidence post soon
Posted by thomas shay at 9:47 PM No comments: Links to this post

This online form was provided by Freedback.